How To Treat a Parasite Invasion-Yes, We All Have Them!

Categories: Anxiety & Stress, Detox, Emotional Health, Herbs, Mental Health, Skin Health, Uncategorized
Tags: autoimmunity, detox, infections, parasites, physical health
A while back, I met a man who was infested with parasites. I believe the universe brought him directly to me. He had been sick for five years. His treatment consisted of vitamin IVs and various herbs prescribed by a naturopath.

I met a man with parasites and they were destroying his life….

He was frail and thin when I met him. I could sense the pain. He spoke openly about the infestation and how allopathic medicine told him he was crazy after all tests came back negative. Conventional medicine, the world I once worked in, would not believe a patient without proof from scientific tests.

Sadly, these patients are brushed aside with stigmatizing phrases such as “mentally ill” or “difficult patient.”

It all hit home for me when Luke (not his real name) brought out his phone and showed me his pictures. “That one came from a walled-off abscess on my left arm. I had to lance it.”

Luke had videos of parasites wiggling in abscesses on his back and left arm. He was constantly fatigued and had little appetite. He had adopted a vegan diet years before

I asked Luke how he had contracted this vicious parasite. He traveled extensively and had been in South America frequently. Since then, he had been suffering significantly. In addition, he had subsequently been diagnosed with fibromyalgia, eczema, and insomnia.

However, these named “diseases” are a collection of symptoms. Clearly, Luke had hit a wall in his treatment plan.

And this is how I know that the universe has a plan with every personal connection. Parasites, candida, Lyme – bugs that like to stay hidden in the body – are one of my specialties. I have studied this field for years, and the universe has sent me many patients with this specific issue. I have even developed my own gut and parasite cleanse.

Meeting Luke couldn’t have been by chance

While our meeting was brief, we have stayed in contact. He has sent me videos of parasites wiggling, ones that pushed through the skin from his scalp, his left arm, his back, and ones expelled from the bowels. 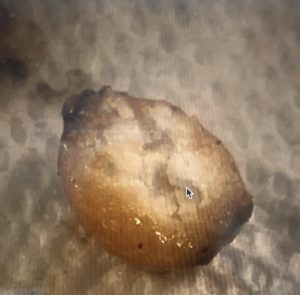 This is likely part of the larvae or egg sack 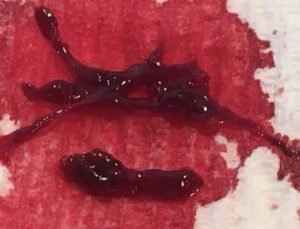 These worms came through the skin of his arm 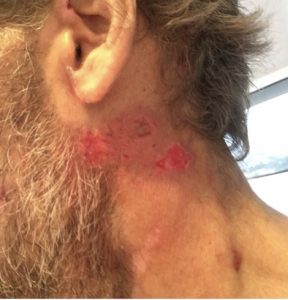 More scars from exit wounds from the parasites 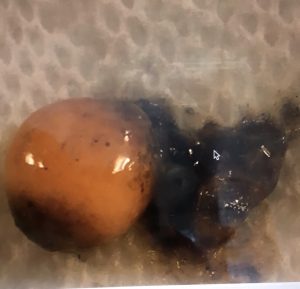 Egg sack expelled into the toilet after a parasite cleanse 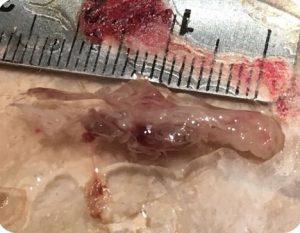 This parasite also came from the bowels after cleansing 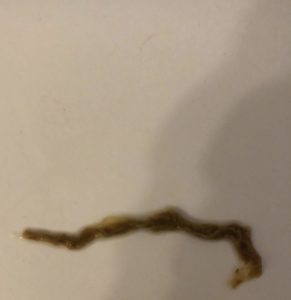 A thread worm or small tape worm in the toilet

While it’s not typical for parasites to come out of the skin except in extreme cases, it can happen. I hope that I have helped him. However, since following my suggestions, he has experienced more Herxheimer, or detox reactions.

Herxheimer reactions happen as parasites die off as a result of treatment. The pathogens like candida, Epstein Barr, Lyme, or other parasites can release toxic by-products such as acetaldehyde. This crosses the blood-brain barrier and can cause brain fog or difficulty concentrating. Some patients may feel almost drunk.

When the body recognizes the pathogens that were previously hidden from the body in a biofilm, a patient may have a fever, nausea, or diarrhea to rid itself of it. Not everyone develops these symptoms, which can be quite miserable. The solution is to ensure you are having plenty of bowel movements. This removes the released endotoxins out of the body including any dying pathogens.

Interstitial cystitis, or irritation and chronic infection of the bladder, is common in people infected with parasites. After Luke increased his treatment plan based on my recommendations, he began to experience severe pain like that of passing a kidney stone. He expelled more parasites than ever. As time and treatment progress, we will know if he needs additional treatment options.

How do you know if you have parasites?

Let’s take a look at how you may know if you have parasites, which are sneaky and smart. They hide in one’s body in the sticky biofilm that protects them from the body’s inherent defenses. It’s like they are invisible to your immune system. Frequently, they develop symbiotic relationships with other pathogens.

In a study conducted in 2016 at Case Western Reserve, researchers showed that fecal samples from patients with Crohn’s disease had significantly higher levels of Escherichia Coli, Seratia marcescens, and Candida tropicalis, two bacteria and a fungus, respectively. This study also showed that all three of these pathogens moved in step, producing a biofilm that not only hides from the immune system but produces the inflammation leading to Crohn’s disease. While other factors play a role in Crohn’s disease, such as genetic and environmental factors, it is likely that parasitic pathogens also play a role.

Symptoms vary widely from person to person. Most people will know something is wrong, but not understand where to turn about the disconcerting symptoms.

Here are some of the more common symptoms:

So what did I tell Luke to do? Well, his diet was already extremely clean so I gave him some more advanced tips. But first, let’s start with the basics.

What diet is helpful to treat parasites?

Avoid any white flour-based products, simple carbohydrates, store-bought fruit juices, dairy, white sugar, pasta, or bread. Eliminate canola oil, gluten, and any chemical fillers. My rule is if you cannot reach into your fridge or cabinet to cook with it, then don’t eat it. Eat loads of leafy greens, veggies, apple cider vinegar, lentils, legumes, minimal quinoa, and brown rice. Fruit is ok too but try to avoid high sugar fruits like melons.

Please stop taking acid blockers which change the pH of your stomach. If you have GERD or acid reflux, your body is warning you to CHANGE YOUR DIET because the wrong bacteria are alive and well in your gut. Once the pH is more alkaline due to the acid-blocking medication, then your natural digestive enzymes are not triggered. Your body cannot efficiently break down, absorb, and assimilate your food. Missing nutrients hurts your health.

At the same time, temporary digestive enzymes may be used with meals until the gut is healthy again or if you are going to eat a meal that you know your body may have difficulty with. Look for a brand without fillers that contain a wide range of enzymes like bromelain (from pineapple), papain (from papaya), proteolase, amylase, lipase, betaine (that’s a no-no if you have an active ulcer) and pepsin.

Probiotics are also HUGE right now and for good reason. It’s similar to loading billions of soldiers into the war in your gut. The more good guys you have, the better you feel. So far, I haven’t created a probiotic, but when I do, it will be of the highest quality. Currently, I’m really impressed with soil-based probiotics.

Herbs and vitamins to treat parasites

Many of the herbs used to treat intestinal parasites have toxic side effects or interfere with other medications. Use them only under the supervision of a qualified practitioner. Your healthcare provider should treat you with the most gentle herb that is effective for the type of parasite you have.

A few of the herbs that your provider might consider include:

What else did I recommend to Luke? He was already taking herbs and vitamin IVs.

One option is turpentine. Turpentine comes from trees and is a resin or pine wood and its purpose is to protect trees from parasites. It works by placing a few drops on a sugar cube, which serves as the bait for the unwanted guests. You won’t find much medical literature on this one, but you will find anecdotal stories and blogs. I do hold weight in patients and what they say. When Luke began taking turpentine, he began to expel many more parasites from his skin, scalp, kidneys, and bowels.

Another extra tip I gave Luke was major autohemotherapy or IV ozone. Ozone has gotten a bad rap in the USA, but internationally, it is well known to be a potent viral, parasite, and bacterial killer.

When I trained in Gerson therapy module one in 2015, I’ll never forget what a surgeon from Dubai told me. He stated that he had used ozone in the ICU for years without negative consequences and had witnessed its benefits. He spoke of all the international ozone conventions and boards. When I asked how come no one in healthcare used it in the USA, he looked directly at me and said sternly, “because it’s against their medical mafia.” I have never forgotten that and never will.

Since then, I have trained in ozone therapy and administered it in clinics in California. I have watched it work extremely well against pathogens like Lyme.

Remember that not only can parasites cause many of the symptoms we’ve discussed, but bacteria and viruses can too! So many patients are suffering from lowered immunity from low grade, but persistent infections that can insidiously take over their systems, including Epstein Barr virus, cytomegalovirus, streptococcus, and staphylococcus.

Remember to always check-in and discuss your potential treatment plan with a trusted healthcare professional who understands YOU. As always, learn to become your own best doctor.