Mold and the Brain: How Neurologic Conditions Might be Linked to Toxicity and Sick Buildings

Categories: Detox, Mold
Tags: autism, brain, mold, mold illness, mold toxicity, neurologic conditions
Mold illness is a chronic, multifaceted, often debilitating disease that is very much neglected, downplayed and misdiagnosed. Much of the research has denied the severity of mold illness and CIRS, chronic inflammatory response syndrome. But lately the science is showing hat multiple mycotoxins do have the potential to cause disease including Fusarium, Penicillum, Aspegillus and stachybotrys.

Mold is a type of fungus grown in multicellular filaments on moist food and other surfaces. While generally thought to be an outdoor problem, mold contamination in buildings is quite common. In fact, effects of air pollutants have been receiving increased attention both clinically and in the media.

One study from Harvard University (Cambridge, Massachusetts), in 13,369 white children aged 8 to 12 years from 24 communities across North America, reported that the prevalence of indoor mold growth was between 22% to 57%, affecting 450% of households in 5 communities.

How does fungus enter our body?

Fungal growth occurs in the form of multicellular filaments known as hyphae or spores. The growth of molds is omnipresent not only in outdoor settings but also in indoor environments containing excessive amounts of moisture. Modern day building practices have exacerbated the problem. Energy efficient homes with little air flow is not how nature intended.

Some molds, especially Trichoderma, Fusarium and Stachybotrys species, produce mycotoxins that are absorbed from the skin, airways, and intestinal lining. Mycotoxins are secondary metabolites that are volatile organic compounds and can damage our DNA. People exposed to molds and mycotoxins present with symptoms affecting multiple organs, including the lungs, musculoskeletal system, as well as the central and peripheral nervous systems. 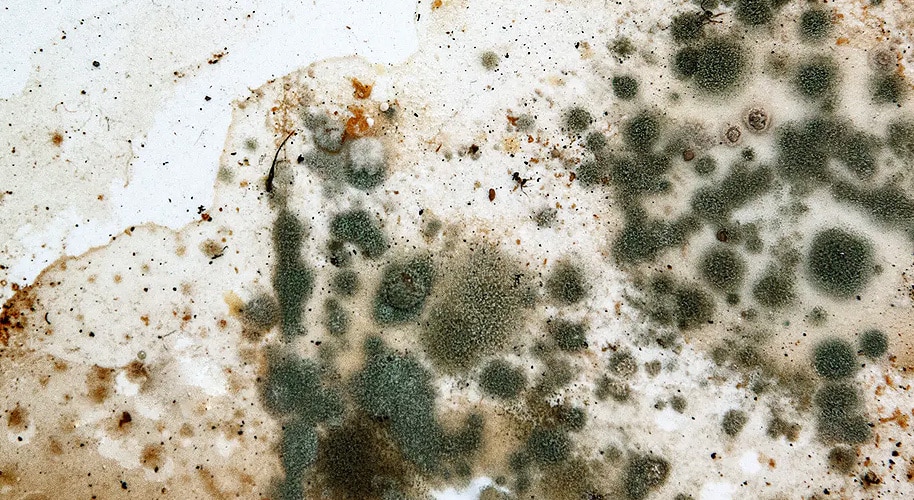 What does mold illness do to some susceptible people?

Keep in mind we think nearly 25% of the population has a genetic susceptibility called HLA-DR (you can get that checked in bloodwork), that does not let them properly dump spores out of their bodies, even if they are out of the water-damaged building.

That’s a lot of people.

Many indoor air mycotoxins are neurotoxic. In fact, Trichothecene mycotoxins released by Stachylobotrys spp, such as satratoxins G and H, have been shown to produce neurotoxicity in humans. Many of these clinical features can partly mimic or be similar to classic neurologic disorders including pain syndromes, movement disorders, delirium, dementia, disorders of balance and coordination, “brain fog”, tremors, jerking movements, spastic dysphonia, tic-like motions and idiopathic paroxysmal involuntary movements. These symptoms may be often misinterpreted or overlooked, especially in cases when conventional anti-Parkinson’s medication does not help. Involvement of the nervous system is confirmed not only by detecting biochemical markers, but also by using modern functional imaging techniques like SPECT MRI scans.

In one study, 182 people with a confirmed mold exposed history were studied. The patients reported moderate to severe levels of cognitive, physical, and emotional symptoms, mostly depression, while quantitative electroencephalography results showed hypo-activation in the frontal cortex, which could potentially be due to brain stem involvement and insufficient excitatory input from the reticular-activating system. Neuropsychological testing also indicated impairments similar to those seen in mild traumatic brain injury, in which there were findings of impaired functioning on multiple cognitive tasks when compared to premorbid estimates of intelligence.

In one study, adult patients who had been exposed to mold were impaired on a variety of cognitive measures, including verbal learn- ing, visuospatial learning and memory, psychomotor speed, and emotional functioning. In children, asthma diagnoses are prevalent.

Based on some newer review literature, ALS or Amyotrophic Lateral Sclerosis may be due to mycotoxins generated by fungi colonizing the human upper airway, mouth, sinus cavity or even a tooth socket! What have I always said?

Any of the hundreds of fungal contaminants could be responsible, but Fusarium species seem especially suspect, releasing the mycotoxins, Fumonisins and Trichothecenes. Previously, it was assumed that one needed to be immune suppressed before these spores and hyphae could infect and release mycotoxins. It now seems possible that opportunistic fungi can colonize the upper air releasing mycotoxins in those with normal immune systems. These mycotoxins are highly lipophilic, or they love fat, and are able to cross into the base of the brain and cerebrospinal fluid, accumulating in the spinal cord. Fungal invasion is un-likely to be a factor until late in the course of the disease.

Probably not surprising at this point since you understand how mold works, it has also been connected to mental illness such as depression and even hallucinations.

A 2007 groundbreaking study was the first to link mycotoxin exposure in water damaged buildings to major depressive disorder.

One study investigated the effects of mold exposure on human cognition by analyzing neuropsychological data from patients who were exposed to mold in their homes or workplaces. Compared to normative data, mold exposed patients were impaired (< 10th percentile) on a number of cognitive measures, with the most consistent deficits in visuospatial learning, visuospatial memory, verbal learning, and psychomotor speed. We also examined emotional functioning and found that a number of mold exposed patients showed evidence of both Axis I and Axis II pathology (that’s schizophrenia to antisocial to borderline or mood disorders).

Behind the scenes, mold spins the innate immune system out and the other side of the immune system, adaptive immune system, cannot see it. This imbalances the body and leads to a catch-all for disease as it goes straight for the energy maker of the cell, the mitochondria. 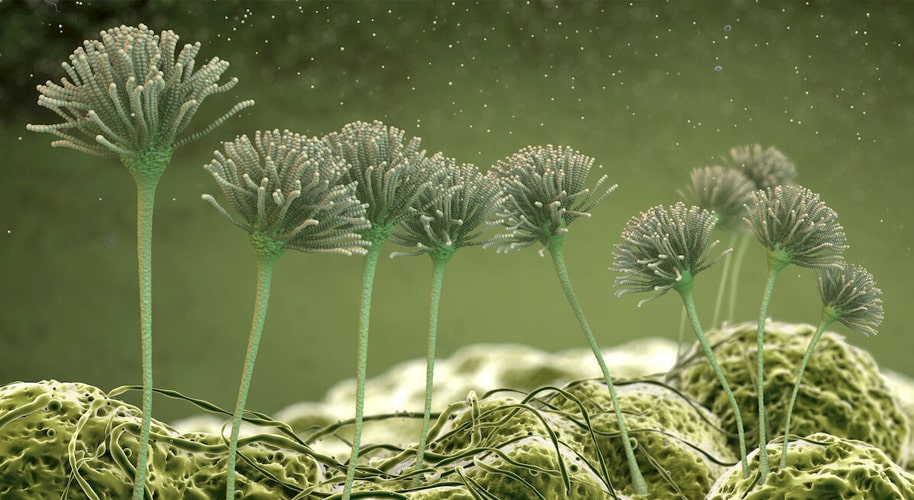 What happens biochemically in the brain and body?

The effects of mycotoxins can be mediated via different pathways that include the secretion of pro-inflammatory cytokines, or chemical messenger from cells called mast cells. Substance P is often also released, which is neurokinin that crosses the blood brain barrier, creating “brain on fire” or neuroinflammation. Substance P can bind to its receptors on mast cells triggering release of histamine. Histamine also crosses the blood brain barrier. Such an assault on the brain can manifest in a myriad of neurological conditions throughout life.

Mycotoxins attack on multiple fronts. They spin the immune system out of homeostasis and have multiple actions on the cell: they may increase the production of reactive oxygen species (ROS), may deplete ATP synthesis by stunting the work of mitochondria, may alter mitochondrial membrane potential (ΔΨ) and facilitate the release of mitochondrial proteins into the cytosol. Exposure to mycotoxins activates inflammatory machinery in the cell. This will promote the production of the pro-inflammatory IL-1β cytokine, the marker of the activation of innate immunity. When IL-1β cytokine binds to its cognate receptor, IL-1R1, intracellular signal to click ON inflammation in the stuck position occurs. This mechanism will lead to a vicious cycle of inflammation. Neuroinflammation will clinically manifest as, eventually as epilepsy, seizures, and difficulty regulating body temperature as one loses control of the autonomic nervous system.

It’s no wonder that so many disorders and autoimmunity are linked to mycotoxicosis!

What about in kids?

Like I mentioned, mold is linked to autism in the studies, although not everyone fits in this category.

Autism spectrum disorder (ASD) now affects an estimated 1 in 59 children and remains without a clear pathogenesis despite advances in identifying multiple genetic mutations. But what caused those genetic mutations? The environment. Understandably the diagnosis of ASD has increased due to broader criteria for diagnosis, but more is involved here. There is no argument that the amount of plastics, pesticides, petroleum and chemicals have increased environmentally. Many of these are persistent organic pollutants that cross the blood brain barrier, including the mycotoxin, zearlenone. We would therefore be remiss to not consider this as an option that ALSO might be increasing the diagnosis of neurological conditions at any given age.
Consider what mold illness may due to a newborn with a developing and easily disturbed immune system.

In a subsequent cross-sectional study, levels of different mycotoxins (aflatoxin M1, ochratoxin A, and fumonisin B1) were shown to be significantly higher in serum and urine from 172 children with ASD as compared to 61 healthy controls.

Those two directly link ASD to exposures like mold. But other studies link exposures to cognitive deficits that we would not necessarily call ASD. (Remember some ASD are geniuses)

For example, A 6-year follow-up study conducted in Poland explored cognitive functioning in 277 infants born at term and exposed to mold in contaminated homes in the early postnatal period. The presence of visible mold patches on indoor walls was checked at consistent time intervals over gestation and after birth, up to the age of 5 years. Longer (42 years) exposure to indoor molds was associated with deficits in intelligence quotient (IQ) compared to that in controls. And this was statistically significant in the studies.

In studies in mice, satratoxin G which is a trichothecenes mycotoxin from Stachybotrys mold, was shown to produce apoptosis or death in sensory neurons in the olfactory (where you smell) bulb, as well as brain inflammation, or encephalitis associated with persistently high levels of pro-inflammatory cytokines in the frontal brain region. Again back to those chemical communicators, the cytokines, and as you can see mold produces a lot of them that set off inflammation.

Many pro-inflammatory cytokines are secreted from mast cells, which are found in all tissues, including the brain. Recent studies have shown strong associations between the prevalence of mast cells and an increased risk for ASD. A case of particular interest is mastocytosis, characterized by the abnormal accumulation of mast cells in one or multiple organs, and mast cell activation syndrome (MCAS). The prevalence of ASD is 10-fold higher in children with mastocytosis than in the general population! Moreover, one third of patients with mastocytosis display various neuropsychological symptoms, including fatigue, cognitive impairment, and depression It is of interest that mycotoxins can stimulate mast cells and microglia (the immune cells of the nervous system), because mast cell–microglia interactions have been implicated in neuropsychiatric disorders, especially “brain fog.”

Such triggers could in- crease the permeability of the gut–blood and blood– brain barriers through mast cell mediators, especially cytokines (I know again), allowing circulating and environmental toxins to pass into the brain, trigger microglia proliferation, and disrupt neuronal connectivity. For instance, it has been reported that propionic acid and ammonia released by Candida albicans in the gastrointestinal tract leads to the generation of β-alanine, which could cross the blood– brain barrier and act as a partial blocker to GABA receptors there. Not good, that means candida can can anxiety since GABA is the calming neurotransmitter.

All this scientific info may sound intimidating but Dr. Jess firmly believes knowledge is empowerment. And mold illness can be reversed in the right hands.

How do I fix mold?

Dr. Jess has a tried and true method and over 90% success rate with clients.

First and foremost, get out of the exposure!

Make sure you can sweat and are having normal bowel movements prior to starting any protocol.

Look into Dr. Jess’s Kill, bind, sweat protocol as well as her favorite mold toxin binders, Carboxy and Biotoxin Binder, made by Cellcore Biosciences. Join her subscription plan where she empowers you to heal at https://app.drjessmd.com.

See you health warriors there!

Celery Juice: Fact or fiction?
How To Stop Herxheimer, or Healing Detox Reactions
Potential Concern for Anaphylaxis and Cross-reactivity from Pfizer’s SARS-CoV-2 Vaccine