I do not intend this to be a pro versus anti vaccine post. I am a conventionally trained medical doctor so I am more concerned about whether patients are able to make informed decisions about vaccinations since most doctors are not providing them with package inserts or a full risk profile. This post is about TRUE informed consent. The public should have a choice to make an informed, decision– not rooted in fear from your doctor and based on the 72 vaccines on the CDC recommended vaccine schedule. If you follow the current CDC Childhood Immunization Schedule, your children will receive over 36 vaccines by the time they are 6 years of age. Thats a lot considering I got 14 in my lifetime.

Proponents of vaccination say it is safe and one of the greatest health developments of the 20th century. They point out that illnesses, including rubella, diphtheria, smallpox, and polio are now prevented by vaccination and millions of children’s lives are saved. They contend adverse reactions to vaccines are extremely rare.

Opponents say that children’s immune systems can deal with most infections naturally, and that injecting questionable vaccine ingredients into a child may cause side effects, including seizures, paralysis, and death. They contend that numerous studies prove that vaccines may trigger problems like ADHD, allergies and eczema. Natural immunity is stronger and more long lasting.

Keep in mind in all of science, there is not ONE man made drug that comes without side effects. NOT ONE. We have no problem discussing brain hemorrhages as a risk of blood thinners or telling patients that heart stents do not prolong their lives. Why then, can we not discuss the pitfalls of vaccines? Moreover, we understand that not every drug is for every person. Why then can we not grasp that about vaccines?

Moreover, science is NEVER settled. NEVER. If you want to know fully and have full informed consent about vaccines, then do not look at the muddled science. It has been shown that the majority of research can be swayed in a certain, favorable direction given the circumstance. There are endless wars on the back and forth science, depending on who does what study.

Look instead behind the scenes at the lawsuits.

But first, lets back up a bit and dig into the history.

History of the Legalities of Vaccines

In 1986 the National Childhood Vaccine Injury Act was passed in response to a large number of lawsuits filed claiming vaccines were causing adverse reactions including brain damage and death. This new act shielded medical professionals and vaccine manufacturers from liability if an person suffered a vaccine injury. The act mandated that vaccine injury claims be filed with the US Court of Federal Claims rather than filed directly against physicians or vaccine manufacturers in civil court. Unlike civil court, people filing injury claims are not required to prove negligence or failure to warn; they only need to prove that a vaccine caused injury.

Then on Oct. 1, 1988, the National Vaccine Injury Compensation Program (VICP) was created under the National Childhood Vaccine Injury Act. The VICP was “established to ensure an adequate supply of vaccines, stabilize vaccine costs, and establish and maintain an accessible and efficient forum for individuals found to be injured by certain vaccines.”

Subsequently, in 1990 the US government (CDC and FDA) created the Vaccine Adverse Event Reporting System (VAERS). VAERS collects information about adverse events via reports filed passively, including medical professionals and family members. VAERS receives about 30,000 reports each year.  85-90% of VAERS reports are for “mild adverse events such as fever, local reactions [such as redness at the injection site], and episodes or crying or mild irritability.” The other 10-15% of VAERS reports is for “serious adverse events involving life-threatening conditions, hospitalization, permanent disability, or death, which may or may not have been caused by a vaccine.”

You may be thinking, how can vaccines not be fully safe? Remember no drug is.

Also, have you ever asked to see a package insert? Some ingredients are things most of us would not ingest orally. Injecting into a vein bypasses our body’s natural defense system-the gut which makes the ingredients even more important to understand! Please also know the difference between an informational packet (on left below) versus a manufacturer’s package insert (right below). Also please ask to see the risks listed, as they are required by law. This is true informed consent. 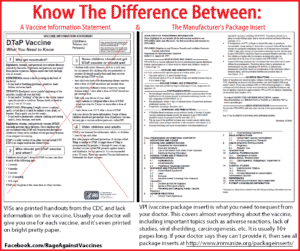 Recently a Harvard study showed less than 1% of vaccine reactions are reported to VAERS.

Wonder why? Before I left the hospital system I knew nothing of VAERS, as a DOCTOR. Have you heard of it?

Slowly but sure, medical terminology has been changed and “disorders” that were once considered under the umbrella of vaccine injury were slowly removed. This is what happened in California under SB276 and SB277. in 2019, SB276 passed and all medical freedom in California was lost. A child basically must have anaphylaxis to a vaccine to get an exemption. However is that ethical? People should be given objective consent, not persuaded consent. They should be shown an insert willingly, and not bullied by physicians. The days of doctor dictator are over. People can make logical decisions when presented with unbiased evidence.

But wait–Hasn’t it been proven that vaccines do not cause autism? Well, yes in studies. BUT NOT LEGALLY.

Hannah Poling who received 9 vaccinations in 2006 and regressed into a non verbal state, later called vaccine induced brain injury. Her father was a pediatric neurologist who had worked with Dr Zimmerman, another pro vaccine pediatric neurologist who has given expert testimony in favor of vaccines in the past. In fact, Dr Zimmerman was Hannah’s doctor.

Hannah’s family sued and her dad even tried to get the word out. He even says he is not anti vaccine, but that better informed consent needs to be given. What they didn’t know at the time of the jabs, was that Hannah had a pre-existing mitochondrial disorder.

The government conceded that since Hannah had an unknown mitochondrial disorder, the vaccines aggravated her condition, leading to autism and a regression in speech and development.

They then proceeded to SEAL THE CASE FROM THE PUBLIC. 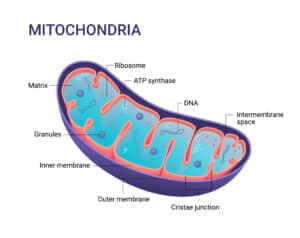 It is estimated that they awarded up to 20 million over the course of Hannah’s life. FOR VACCINE INDUCED BRAIN INJURY! So no-science is not settled.

So glad you asked. It is the powerhouse of every cell, except for red blood cells. They make ATP, or cellular energy to keep you going through glycolysis and the Kreb’s cycle. They also contain their own set of DNA, inherited only from your mother. Without mitochondria in tip-top shape, you feel heavy, like you cannot think straight or have brain fog and might have a pins and needles sensation on your extremities.

Dr Zimmerman said later -“that there may be a subset of children who are at risk for [developmental] regression if they have underlying mitochondrial dysfunction and are simultaneously exposed to factors that stress their mitochondrial reserve.”

Vaccination, Zimmerman argued, could potentially be a factor that “stress mitochondrial reserve.”

WOW why is this not considered at all in a mandatory vaccination schedule?

Who is susceptible to mitochondrial demise? 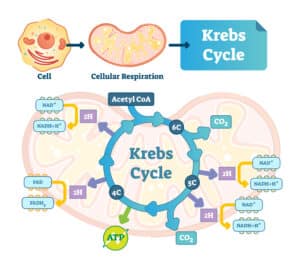 How do we know who is susceptible for mitochondrial damage? Which children might be predisposed to this?

We do not without genetic testing. We even have the capability to test what medications will work best for patients based on their epigenetic changes in the DNA. Why would we not do this for vaccines knowing this scenario happened with Hannah? This is a very new area of science and we should not be mandating scientific procedures when there is inherent risk.

EVERY DOCTOR SHOULD KNOW ABOUT THIS STUDY AND IF THEY TOOK THE HIPPOCRATIC OATH, BE TELLING THEIR FRAGILE PATIENTS ABOUT IT.

You should at least read a package insert and know that antibiotics and some other fillers and detergents are in them. You should also know that studies are showing antibiotics ORALLY are capable of damaging mitochondria so imagine what injecting them can do? Why? 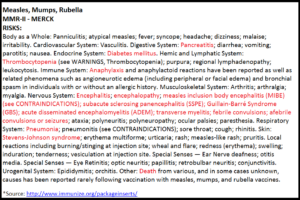 Mitochondria behave like bacteria and just as bacteria are damaged by antibiotics, so are mitochondria. This is not UNCOMMON. I treat this daily. You do not just have to have some inherited congenital mitochondrial disorder, you can have lifestyle induced mitochondrial damage too-caused by medications (SSRIs, birth control pills, antibiotics, chemotherapy, HAART), longterm stealth infections, pesticides, plastics and other corporate toxicities that cause oxidation damage or disrupt the endocrine system. THIS IS BECOMING FAIRLY COMMON.

The purpose of this post is not to convince you to be anti vaccine. There are people who benefit from vaccines, however, on the flip side, there are patients who suffer greatly. I believe this is because only one rhetoric is provided to the patient.

“Get your flu shot every year.”

“Get all your vaccines or you cannot attend school.”

“Vaccines do not cause autism.”

“Vaccines are proven safe and effective.”

Not all of these are true for everyone since everyone’s genes and genetic expression is so very different. If we are truly out to protect children, we should be screening for mitochondrial reserve before adding adjuncts and fillers that can damage an already fragile child’s DNA.

ADVOCATE FOR YOUR CHILD AND YOURSELF: