The Dangers of Unstudied Frequencies on Our Health: 5G, EMR and WIFI

I will always remember the day my dad came home from Panera Bread raving about “hot spots” that you could use to access the internet. Today, WiFi is ubiquitous. Mobile devices are necessary for everyday life. Our lives have become a blur of responsibility and hustle. It makes me wonder if we have stopped to question the technology that surrounds us.

5G is here now. We cannot assume that profit-driven corporations will consider the impact on our health. The media avoids the topic for the most part. CBS reported recently:

“The wireless industry is in a race to roll out 5G service. The network is supposed to be up to 100 times faster than current data speeds, but it requires cellphone tower equipment to be closer to users than before. Wireless companies in the U.S. say they’ll have to install about 300,000 new antennas – roughly equal to the total number of cell towers built over the past three decades. That’s causing outrage and alarm in some neighborhoods, as antennas go up around homes.”

Do they test it prior to launching? Is it safe? What are the long-term consequences? What exactly does the lower frequency EMF like routers, Gwen towers, smart meters, wifi or Bluetooth mean for our physical and mental health?

However, 5G applications need higher frequency ranges from 6 to 10 GHz and above using millimeter and submillimeter waves. They enable ultra-high rates of data to be transmitted in the same amount of time as current rates.

Just because something is invisible to humans makes it no less real or without any negative consequences. Some of the recent studies are alarming.

“Radiofrequency Electromagnetic Radiation does not break chemical bonds but does affect biological systems. Some biological effects of RF EMR appear to be mediated by an increase in free radicals, mediated by calcium channel membrane alterations. RF EMR in wireless devices has been shown to increase reactive oxygen species (ROS) in cells. Excess ROS generates oxidative stress, a damaging process that can, in excess, alter cell structures such as proteins, lipids, lipoproteins, and DNA. Oxidative stress is associated with the development of chronic diseases such as cancer, neurodegenerative diseases, cardiovascular diseases, arthritis, autoimmune diseases, and aging. Reactive oxygen species are also produced by exposure to pollutants, tobacco smoke, pesticides, industrial chemicals, heavy metals, and some drugs. Many studies show that antioxidants inhibit damage from wireless radiation as well as chemicals.”-Physicians for Safe Technology

EMF promotes oxidative stress, a condition involved in cancer onset, in several acute and chronic diseases, and in vascular homeostasis. While some evidence is controversial, the WHO IARC classified EMF as “possibly carcinogenic to humans.” More recent research suggests that EMF may have negative consequences on the metabolic, reproductive, and neurologic systems. EMF may also be able to alter bacterial antibiotic resistance.

And here, I sit in front of my computer! 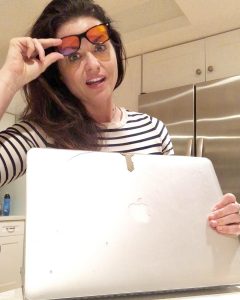 For instance, research from the Journal Dose-Response showed that E. coli and Listeria, two pathogenic bacteria, overcame an antibiotic’s bacteriocidal (killing power) activity when placed near 2.4GHz and 900MHz radiation and a cell phone. They also increased growth when exposed to certain high-frequency EMF.

“A Swiss mold researcher once conducted some simple experiments to measure the virulence and presence of mold and mold toxins in high EMF environments. HE exposed molds to a WI-Fi router and found the production of mycotoxins was dramatically increased by the energetic frequencies. The virulence of the mold toxins also increased 600-fold.”

Multiple studies have elicited that manmade frequencies can interfere with bacterial communication. This makes sense since bacteria communicate using FREQUENCIES and considering we are more bacteria than cells, you might see why this is concerning.

Research shows a strong correlation between long-term cell phone radiation and brain cancer. This may be a result of oxidative and free radical damage as well as epigenetic changes. The majority of studies are systematic reviews that show an elevated risk of glioma with long-term exposure.

In 2011, the International Agency for Research on Cancer (IARC) evaluated cancer risks from radiofrequency radiation. Human epidemiological studies show evidence of increased risk for glioma and acoustic neuroma. Electromagnetic radiation was classified as Group 2B, a possible human carcinogen.

Additional studies have supported the correlation. Despite this, most countries have taken no action to reduce exposure and educate people on health hazards from Wi-Fi or cell phones. On the contrary, ambient levels have increased.

In 2015, Lerchl, et al, published a critical replication study that confirmed that WiFi acts as a tumor promoter. The study showed that lymphomas and tumors of the lungs and livers in exposed animals were significantly higher. The WiFi exposure was at low to moderate exposure levels, well below exposure limits for the users of mobile phones.

This research is significant in that it used a larger group of mice and replicated tumor-promoting effects shown in a 2010 study.

While it is difficult to study WiFi effects on humans, some animal studies exist that make the correlations.

A 2017 study reported increasing rates of infertility that may be related to EMF. It reviewed proteomic experimental and clinical evidence that EMF acts as a male-mediated teratogen and contributed to infertility.

Research also shows damage after wireless exposure to the ovaries of mice and rats in addition to changes in the eggs of birds and flies.

From the most current research published in the Journal of Reproductive Biology and Endocrinology:

“From currently available studies it is clear that radiofrequency electromagnetic fields (RF-EMF) have deleterious effects on sperm parameters (like sperm count, morphology, motility), affects the role of kinases in cellular metabolism and the endocrine system, and produces genotoxicity, genomic instability and oxidative stress. This is followed with protective measures for these radiations and future recommendations. The study concludes that the RF-EMF may induce oxidative stress with an increased level of reactive oxygen species, which may lead to infertility. This has been concluded based on available evidence from in vitro and in vivo studies suggesting that RF-EMF exposure negatively affects sperm quality.”

“We have shown that behavioral problems in mice that resemble ADHD are caused by cell phone exposure in the womb,” said Dr. Hugh Taylor of Yale Medical School. “The rise in behavioral disorders in human children may be in part due to fetal cellular telephone irradiation exposure.”

In addition, The International Journal of Radiation Biology vol 16, 2015 reported a study that found significant effects on microRNAs from Wi-Fi exposure at levels far below the legal limit.

The conclusion was that long term exposure of 2.4 GHz RF may lead to adverse effects such as neurodegenerative brain diseases originated from the alteration of some microsRNA expression.

It makes sense that since this technology may interfere with bacterial communication, it may also be tied into immunity suppression. 80% of our immune system is contained in gastrointestinal associated lymph tissue, or GALT, which contains the bacteria in our guts.

A study done in 2017 hypothesized that exposure to EMF may inhibit the response of our immune system through the abnormal influx of calcium into the cells. This causes inflammation and pro-oxidants like reactive oxygen species, which increases calcineurin. Calcineurin is linked to immunosuppression and an increase in opportunistic infections, like mold or candida.

The bees also feel the buzz…

Unfortunately, we aren’t the only ones who may be negatively impacted by abnormal electromagnetic waves. Studies show that some of the bee colony collapse and dwindling numbers may have to do with sensitivity to EMF and Wi-Fi. In many studies, bees exposed to radiation constructed fewer hive cells and returned to the hive much less often after pollinating. In one study, 39.7% of the non-irradiated bees returned to their hives while only 7.3% of the irradiated bees had!

After reviewing the literature, there is an urgent need for further research and “of the 919 research papers collected on birds, bees, plants, other animals, and humans, 593 showed impacts, 180 showed no impacts, and 196 were inconclusive studies”.

Other Risks from 5G in the literature include:

In 2017, the state of California Department of Public Health issued a warning about mobile phone exposure and offered advice about how to reduce exposure and use.

Over 240 scientists and doctors from 41 nations who have published research in the field have appealed to the United Nations calling for urgent action to reduce these ever-growing wireless exposures and they wrote the FCC for a moratorium on the roll-out of 5G citing the serious risks that to human health and the environment.

The Global Union Against Radiation Deployment from Space (GUARD) addressed a letter to the FCC in September of 2016, bringing to their attention the harm 5G will inflict. GUARD warned the FCC that 5G violates Article 3 of The UN Declaration of Human Rights which states that “everyone has the right to life, liberty, and security of person.” The document is supported by a plethora of research, information, and global support.

Apple Watch: ”During testing, Apple Watch radios are set to their highest transmission levels and placed in positions that simulate use against the head, with 10mm separation, and on the wrist, with no separation. When placing Apple Watch near your face, keep at least 10mm of separation to ensure exposure levels remain at or below the as-tested levels.”

Electricity Smartmeter: ”RF Exposure Information: This equipment complies with the FCC RF radiation requirements for uncontrolled environments. To maintain compliance with these requirements, the antenna, and any radiating elements should be installed to ensure that a minimum separation distance of 20 cm is maintained from the general population.”

iPhone 7: “During testing, iPhone radios are set to their highest transmission levels and placed in positions that simulate uses against the head, with no separation, and when worn or carried against the torso of the body, with 5mm separation. To reduce exposure to RF energy, use a hands-free option, such as the built-in speakerphone, the supplied headphones, or other similar accessories. Cases with metal parts may change the RF performance of the device, including its compliance with RF exposure guidelines, in a manner that has not been tested or certified.”

So how can I protect myself?

“Wired technology is a safe technology. The healthiest thing to do is to ensure you have a home corded landline phone and corded computer (with wireless functions turned off). Remember, home cordless phones emit radiation like cell phones, so every home should have a corded landline (with a curly cord to the handset). Forward cell phones to your home line while you are at home. Prefer this corded phone for voice conversations.If you use a cell phone for social media, music, or other facetime, we recommend using your corded ethernet computer for these uses to minimize cell phone use. There is not a “safe level” of cell phone radiation. Therefore if you must use a cell phone, please reduce exposure with the strategies listed below.”

Dr. Jess’s tips for Protecting Your Body and Mind:

5G is personally frightening to me because there will be nowhere safe to hide. That’s why it’s important to be educated as that is the only way to control this. Share this article with your friends and family. Review the references below and learn how to speak out here:
http://www.parentsforsafetechnology.org/stop-5g-spectrum-frontiers.html