Why You Should Care About HPV?

Categories: Herbs, Infections, Uncategorized, Vaccines
Tags: alternative health, gardasil, HPV, vaccination, vaccines, virus
According to the American Cancer Society, approximately 13,800 women will be diagnosed with cervical cancer in 2020, and approximately 4,300 women will die from the disease.

The Prevalence of HPV as a Cause of Cancer

The toxic environment weakens our immune system. This means that 90% of sexually active adults will contract HPV at some time. The virus has over 150 various strains, and 16 to 18 of those strains will likely result in cancer. Keeping your immune system at peak performance is crucial to clearing the viral infection.

According to the Center for Disease Control, “Studies have shown that more than 90 percent of new HPV infections, including those with high-risk types, clear or become undetectable within two years, and clearance usually occurs in the first six months after infection.”

If such a high percentage of cases clear on their own, what should you do? Testing positive for HPV is common. Yet, it can cause considerable alarm.

The Cons of the Gardasil Vaccine

What’s the answer? Should you try herbs? Vaccination? Each individual must make his or her own choice.

My professional opinion is that we do not need additional vaccines to address common diseases. We should work on our nutrition, lifestyle, stress, and immunity. We need to naturally get to the cause of WHY we are susceptible to certain diseases. HPV was not so prevalent 50 years ago. Merck, the pharmaceutical giant, and creator of the HPV vaccination has admitted to the deaths of 117 patients being related to the vaccination.

117 Deaths After a Vaccine Meant to Protect 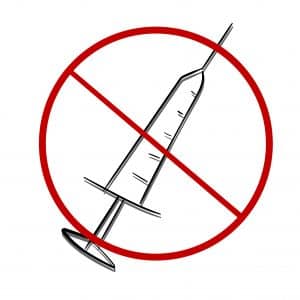 Because the pharmaceutical industry and doctors push so much for Gardasil, I will highlight below the cons of the vaccination.

According to a study published in the Translational Andrology and Urology journal in 2014:

If you have been diagnosed with HPV, you have options beyond the vaccination to avoid a pre-cancerous state. Many physicians will advise you to wait and watch. However, you can be far more proactive in the meantime.

Alternatives to the HPV Vaccination

The objective was to determine how effective AHCC is at eradicating HPV in addition to estimating the necessary duration to achieve the objective.

The first pilot study had 10 women with persistent high-risk HPV infections. They took 3 grams of AHCC once a day from five weeks to six months. Half of the women who followed the protocol for four months showed complete eradication of HPV. They remained infection-free when tested two months after finishing the protocol.

The second study also had 10 women with persistent high-risk HPV infections. They took 1 gram of AHCC for up to eight months. Four of nine patients experienced eradication of the HPV infection by the end of the study period.

The studies concluded that AHCC mushroom is successful at boosting immunity enough to eradicate high-risk resistant strains of HPV.

How Does AHCC Work?

Active Hexose Correlated Compound (AHCC) is an alpha-glucan rich nutritional supplement produced from the mycelia of shiitake (Lentinula edodes) of the basidiomycete family of mushrooms.

At least 20 human trials have studied its effects, and AHCC is well known for its immune-modulating properties. Clinical research shows that AHCC increases the number and activity of natural killer (NK) cells, dendritic cells, and specific cytokines that help the body fight off infections and block the growth of abnormal cells, including cancerous cells.

The compound’s mode of action has been shown to be the stimulation of TLR-2 and TLR-4 receptors in the gut, where 80% of our immune cells are. It also feeds the good colonies of bacteria in the gut and therefore functions as a prebiotic. It is most effective when combined with lifestyle modifications such as safe sex, an organic diet, quitting smoking, exercising, and immunity-increasing supplements like vitamin C, probiotics, zinc, B vitamins, vitamin D, Chaga mushroom, echinacea, and cat’s claw.

My new favorite defense against viruses is Viradchem binder by Cellcore biosciences or Bioactive carbon foundation by Microbe Formulas. These products are formulated by one of the top biochemists in the world. I have had great successes with both of these binders that contain energy, go systemically within the body and do not have to be timed away from other food and supplements. Moreover, they are targeted at chemicals, radiation and VIRUSES.