Categories: Anxiety & Stress, Cannabis, Digestion, Herbs, Hormones, Infections, Lifestyle, Uncategorized
Tags: anxiety, cannabis, emotional health, health, hormones, pain, stress
I’ll never forget the 24-year-old patient that came to me desperate to get pregnant. She was tearful in the office as she described everything she and her husband have been through trying to conceive. She had endometriosis, a disease that causes abnormal endometrial growths outside the uterine wall. If severe, it can lead to infertility. Endometriosis affects one in ten women today in the United States. It causes excruciating pain that is diffuse and hard to characterize. Most women with endometriosis describe painful periods, uncomfortable intercourse, chronic abdominal pain, and even infertility. Conventional medical treatments include synthetic hormones, like birth control pills (which lead to other problems, such as depression) or ablation/surgery, which often does not fix the problem. Efficient medical interventions are pretty dire for many women.

As a medical marijuana expert, I have witnessed many female patients come to the office to secure a medical card for their excruciating pelvic pain due to endometriosis. They have always told me this medicine takes the edge off for them. It's my nature to always trust the patient, but now science is proving why cannabis is so good at alleviating this particular pain.

What is the endocannabinoid system?

Let me explain a little about cannabis and the endocannabinoid system so that you can understand the science behind this misunderstood plant.

The endocannabinoid system (ECS) was never something we were taught about in medical school. It happens to run from your brain to your bowels…and the receptors, known as CB1 and CB2 receptors, are in the highest concentration in the uterus. These receptors wear many hats, including but not limited to modulating pain sensation, mood, memory, appetite, sleep, and immune response.

Many components of the ECS—a group of cannabinoid receptors found in the human body—are found in endometrial tissue. Rodent models of the disease have revealed ECS levels are regulated by the menstrual cycle. These include:

Cannabinoids and endometriosis: how does it help?

Most pain comes from unchecked inflammation or neuropathic pain (nerve pain). Endometriosis is no exception. As cannabinoids are known to decrease inflammation and work well on neuropathic pain, it makes sense that this would be an attractive option. Now that research studies are publishing the mechanism of action, science can no longer deny such a viable choice for women and pain.

Research has shown that in rodents at least, the CB1 receptor protein is found in the uterus and in something called a blastocyst. A blastocyst is a human embryo that was fertilized 5-6 days ago. What this infers is that the CB1 receptor likely contributes to normal fetal implantation vs implantation failure. Yes, it is possible that endocannabinoids play a role in fertilization and growth of the human embryo early on. They even look like they may be involved in reproductive dysfunction. It is well established that the ECS plays a key role in pain receptors and feedback loops and in fact, cannabinoids have been used for centuries to alleviate dysmenorrhea or pelvic pain.

Some studies described endometriosis as an “endocannabinoid deficiency” condition, thereby partially explaining its implication with pain. Indeed, women with endometriosis have lower levels of CB1 receptors in endometrial tissue. Reduced ECS function has been suggested to lead to the growth of endometriosis tissue and more severe pain experience. The ECS seems to be important for the establishment of pain associated with endometriosis. It is interesting to note that CB1 receptor EXPRESSION is greater in unhealthy endometrial cysts than in healthy uterine tissue from the rats in the study (this why the receptors are shown with greater expression in the endometrium of rats with endometriosis-their bodies are trying to increase expression in an attempt to increase CB1 production since they have a deficiency). This suggests that medications or treatments to activate CB1 receptors (CB1 receptor agonists) could provide substantial pain relief for women suffering from pelvic pain syndromes, such as endometriosis, without any side effects. The study, headed by Jerome Bouaziz at the Department of Obstetrics and Gynecology at The Chaim Sheba Medical Center in Israel, showed that cannabinoid receptor agonists, including the phytocannabinoids found in regular cannabis, are effective at regulating the inflammatory response, reducing the growth of endometriotic lesions, and improving neuropathic pain.

Of note,  CB2 receptors are preferentially expressed abundantly in the immune system and intestines and in other tissues such as the lungs, uterus, pancreas, and skin, but do not seem to play a major role in the uterus and with endometriosis. But that’s a whole other post.

In this particular study, rather than use natural cannabis, researchers chose a synthetic cannabinoid known as WIN 55,212-2 (WIN). WIN has been found to be a potent agonist and to have high therapeutic potential. Human endometriosis cells divided and grew LESS (too much tissue growth is the problem in endometriosis) when stimulated with WIN 55212-2. Rodent studies of endometriosis found the animals had more pain when treated with AM251, a drug that inhibits the cannabinoid receptors, and less pain when treated with WIN 55212-2. Interesting, no?

“The graph above shows cell proliferation/growth (vertical column) plotted against WIN concentration added to the cells (horizontal row). Cs, Ds, and Es stand for the type of cell used, with Cs corresponding to intrauterine “healthy cells”, Ds referring to cells taken from surface level growths, and Es referring to cells taken from deep cysts. Regardless of the cell type, readers can see that as the micromolar concentration of WIN (horizontal axis) increased past 5, cell proliferation plummeted! By 40, cell proliferation had all but stopped in all cell types, with between 96% and 99% reduction in all cases. Readers will notice the horizontal dotted line located at 1,00 on the vertical axis. This line represents the expected level of cell proliferation had no WIN been added, and in fact, this line matches the data at low concentrations of WIN. Breaking this all down, essentially what we’re seeing is a dose-dependent reaction to WIN, which means that effects increase with increased addition of WIN.” -Cornerstonecollective.com

How to use cannabis for endometrial pain 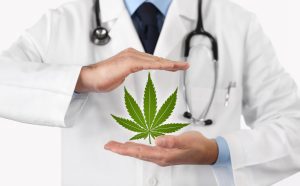 If you are interested in using cannabis for PMS, pelvic pain, or endometriosis, then there are options for you. Unfortunately, you cannot legally obtain any products containing more than 0.3% THC if marijuana has not been medically approved in your state. You can, however, obtain full-spectrum CBD products which is sufficient for most people. There are many options, but here are my favorites:

Cannabis and any CB1 agonist seem very promising in the treatment of endometriosis. My personal experience as a cannabis doctor has proved this to me time and time again.  This puts the medicine, or CBD, directly in the localized area of pain and inflammation, and thus provides a rapid delivery system for pelvic pain.

I am excited to oversee clinical research studies using cannabis as a treatment for endometriosis in the near future. And don’t worry-I’ll keep all of you posted!

Remember you do NOT have to live in pain or take addictive narcotics. There are so many options, including cannabis. Please be sure to do your research so that you can be your own best doctor!