Categories: Anxiety & Stress, Detox, Digestion, Emotional Health, Herbs, Hormones, Infections, Lifestyle, Mental Health, Uncategorized
Tags: ebv, epstein barr, labs, sore throat, virus
Epstein Barr virus, the virus that famously causes mononucleosis, is suspected to infect nearly 90% of us by college age years. It is super contagious but symptoms vary widely. Some people have mild upper respiratory symptoms, while others are out of school for months. Science is just barely beginning to scratch the surface of just how devastating this virus can be for some of us. In any case, there aren’t many answers for those suffering. Just how dangerous can this pathogen be to our immune systems?

What is Epstein Barr virus (EBV)?

We’ve already learned from Jeffrey that most Epstein’s are predatory, and this one is no different. EBV is a human herpesvirus 4, which are some of the most contagious and common pathogens around. It is responsible for infectious mononucleosis, also known as glandular fever, or the kissing disease. The symptoms of mono are extreme fatigue, fever, sore throat, and swollen lymph nodes. These symptoms can last for two to four weeks. After infection, EBV becomes dormant, and people remain infected throughout their lives without any symptoms. Conversely, in some patients, reactivation is common, even into adulthood, if one is predisposed or even slightly immunocompromised.

EBV is spread through contact droplets and secretions, which is why it garnished the name the kissing secretions. 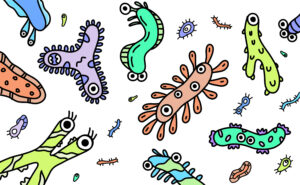 Science has already shown links between EBV and certain cancers like Burkitt’s lymphoma, Hodgkin’s lymphoma, nasopharyngeal cancers, and gastric cancers. About 200,000 cancers per year are thought to be due to EBV.

Recently, a study out of Cincinnati in 2018 and published in Nature Genetics, linked EBV to seven different autoimmune conditions including systemic lupus erythematosus, dermatomyositis, rheumatoid arthritis, Sojogren’s Syndrome, and multiple sclerosis. EBV infects human B lymphocytes, but it was not understood that this dormant infection was connected to longterm sequelae like autoimmunity. The genetic regions associated with lupus were compared to the genetic regions that EBVNA2 (Epstein barr viral nuclear antigen) was found to bind to. Over half of the lupus regions were the same ones that EBVNA was bound to! It was found that EBNA2 was also bound to regions associated with the risk for multiple sclerosis, rheumatoid arthritis, inflammatory bowel disease, type 1 diabetes, juvenile idiopathic arthritis, and celiac disease. This changes the genetic expression of our genes and seems to predispose us to autoimmunity.

These findings suggest that EBV infection drives the activation of genes that contribute to an individual’s risk of developing an autoimmune disease. The scientists note, however, that EBV isn’t the only factor that influences the development of these conditions. And I agree here–in fact, EBV never acts alone. The body is fairly sustainable until it reaches its limit–or your personal toxin bucket is full. At this point, pathogens overtake us, heavy metals begin to affect our health, and disease is diagnosed. EBV is patient and diligent enough; it works slowly to integrate into our DNA, change genes, and insidiously disease ensues.

How does Epstein Barr reactivate?

The latent stage, or dormant stage, subverts infected B-lymphocytes to proliferate and bring infected cells to the sites at which the virus presumably persists. Eventually, when host immunity develops, the virus persists by turning off most (or possibly all) of its genes, only occasionally reactivating to produce fresh virions (viral replication). A balance is eventually struck between occasional viral reactivation and host immune surveillance removing cells that activate viral gene expression. This is the working hypothesis currently on EBV.

The site of persistence of EBV may be the bone marrow. EBV-positive patients who have had their own bone marrow replaced with bone marrow from an EBV-negative donor are found to be EBV-negative after the transplantation surgery.

As we age, childhood diseases can become more severe. I’ve definitely noticed that women’s EBV symptoms seem to flare around their cycles and seem worse into their 40s and beyond. Sore throat and severe fatigue are two of the most common presenting symptoms.

What do my labs mean? How do I know if I have chronic, dormant EBV or reactivated EBV?

A serum blood test is the standard way to accurately test for EBV. However, it can be confusing when requesting labs or trying to interpret what your doctor ordered. To get a full picture, you’ll want to request a:

To look for reactivation, be sure to ask your doc for VCA IgM, VCA IgG, EBV EA. If all three are positive, then EBV is causing a problem with your immune system.

In short, instead of just treating symptoms, your goal is to:

This can take years for many people as everyone is unique and different. It’s never just about eradicating one virus. EBV usually piggybacks with other pathogen friends. So success usually means returning energy, gut health, methylation capabilities, and opening drainage pathways in the body. Symptoms vary widely and some just are not ready to jump right into a cleanse without improving their debilitating fatigue levels first.

This means ensuring that sleep is deep, adequate, and restful. You should feel rejuvenated in the mornings. Bowels should be normal, going twice per day. You should be able to sweat when exercising, within 10-15 minutes. It means not excessively craving sugar and nourishing the body with well rounded whole foods from the earth. No supplement or pill will be the magic bullet until we can return the body to normalcy so it has a fighting chance. This means finding a skilled practitioner you can trust and that listens to you. Your doctor should also investigate gut health with specialty tests, hormones and adrenals and possible environmental exposures like heavy metals or pesticides that may be contributing to lowering your overall immunity, letting EBV rear its ugly head.

Some useful herbs/minerals to fight viruses include:

I personally also love ozone therapy for antiviral therapy as well. In this procedure, a doctor removes blood from the patient and mixes it with ozone, or three atoms of oxygen. This ozone is made from a medical-grade machine called an ozone generator. The hyper oxygenated blood is then dripped back into the patient’s blood. In super layman’s terms, if we think back to science class, the chemical formula for the ozone molecule is O3 (three oxygen atoms), and the chemical formula for oxygen is O2 (two oxygen atoms). A free radical is an unpaired electron that is more volatile and looking for a home. One of the three oxygen atoms in the ozone matches up with a free radical in your blood, and together they create O2 (more oxygen). This is actually a form of oxidation, which we’re generally told is only negative. However, not all oxidation is bad- their needs to be a balance of pro and antioxidation. Some oxidative stress can actually be healing for the body—exercise creates another form of this. Ozone is also known to produce H202, or hydrogen peroxide in the blood, which is a natural disinfectant. It is also naturally produced by our body as an innate defense mechanism.

As far as food is concerned, I advise against the inflammatory foods of processed dairy, sugar, soy, factory-farmed meats, farmed fish, and gluten. Celery juice every morning, as well as a plethora of leafy greens and cruciferous veggies, are encouraged.