Why You Should Remain Wary of the Covid-19 Vaccine

Categories: Anxiety & Stress, Cannabis, Detox, Digestion, Emotional Health, Herbs, Hormones, Infections, Lifestyle, Mental Health, Products, Recipes, Sample Category, Self Care, Skin Health, Uncategorized, Vaccines
Tags: coronavirus vaccine, covid vaccine, covid-19, flu, holistic covid remedies, pfizer vaccine, vaccine, winter
Pfizer is now boasting a 90% success rate on their new vaccine. With the pressure on to find an answer to the pandemic, government officials are now hanging their hat on the success of a novel vaccine to eradicate a novel virus. But where are the downfalls and are we being told the whole truth?

With numbers of Covid-19 soaring as winter is upon us, vaccine manufacturers are rushing to bring a vaccine to the frightened public. What is concerning however is that trials are not designed to give us pertinent answers and the world has bet the farm on vaccines.

The long-awaited announcement came in a Nov. 9, 2020 news release detailing the results from an interim analysis of an ongoing Phase III clinical trial comparing the vaccine developed by the global pharmaceutical company Pfizer and German biotech company BioNTech, with a placebo.

What’s interesting to note, however, is that Pfizer’s CEO, Albert Bourla (this is the vaccine we will be discussing the most), sold his stock in Pfizer and tripled his base salary. In fact, since announcing that the vaccine is “90% effective,” Pfizer has racked in 5 million dollars and has made 300 million doses of their vaccine ready to roll. Let’s read between the lines. Besides what mainstream media reports, what does the study design show us and how is the vaccine made?

How does the vaccine work?

The jab is known as a messenger RNA (mRNA) vaccine, which uses genetic code from the virus to provoke the immune system. It is genetically lab-engineered and is the first of its kind in humans. The concern for genetically modified vaccines of this type is that they can potentially insert themselves into the host chromosomes, resulting in alterations in cellular genomes, for not just us, but our offspring. It is unknown as to what long-term problems this could lead to.

Many of the vaccines are made of lab-generated genetic material that is then placed inside a fatty molecule, known as a lipid nanoparticle. The genes are specifically chosen by researchers to code for the ‘spike’ protein on the coronavirus envelope. Nanoparticle release has never been properly studied in humans and part of them are made with polyethylene glycol or PEG, known to cause serious immune reactions in sensitive individuals. When the vaccine ingredients get into the body, the body makes its own copies of this spike protein and that triggers the immune system in the same way that the natural virus supposedly would, although milder.

Another concern for this vaccine is how it is produced. All vaccines are produced and replicated onto a cell culture. Cell cultures are not perfect and have their own widespread concerns, considering this was also a concern with how controversial stem cells were being cultured. Some vaccines are produced in manufactured immortal cell lines, usually of monkey cell lineage.

Moreover, Many mediums and cultures are contaminated with retroviruses and other foreign material. This raises questions about the potential of genomic inserts into our human DNA.

The full data set on these vaccines have not been released and so we don’t know exactly what has been found since the analysis of the study has only been released. If a vaccine is to reduce severe disease and death and thus enable the population at large to return to their normal day-to-day lives, it will need to be effective in older and elderly members of our society, as well as those who are immunocompromised. 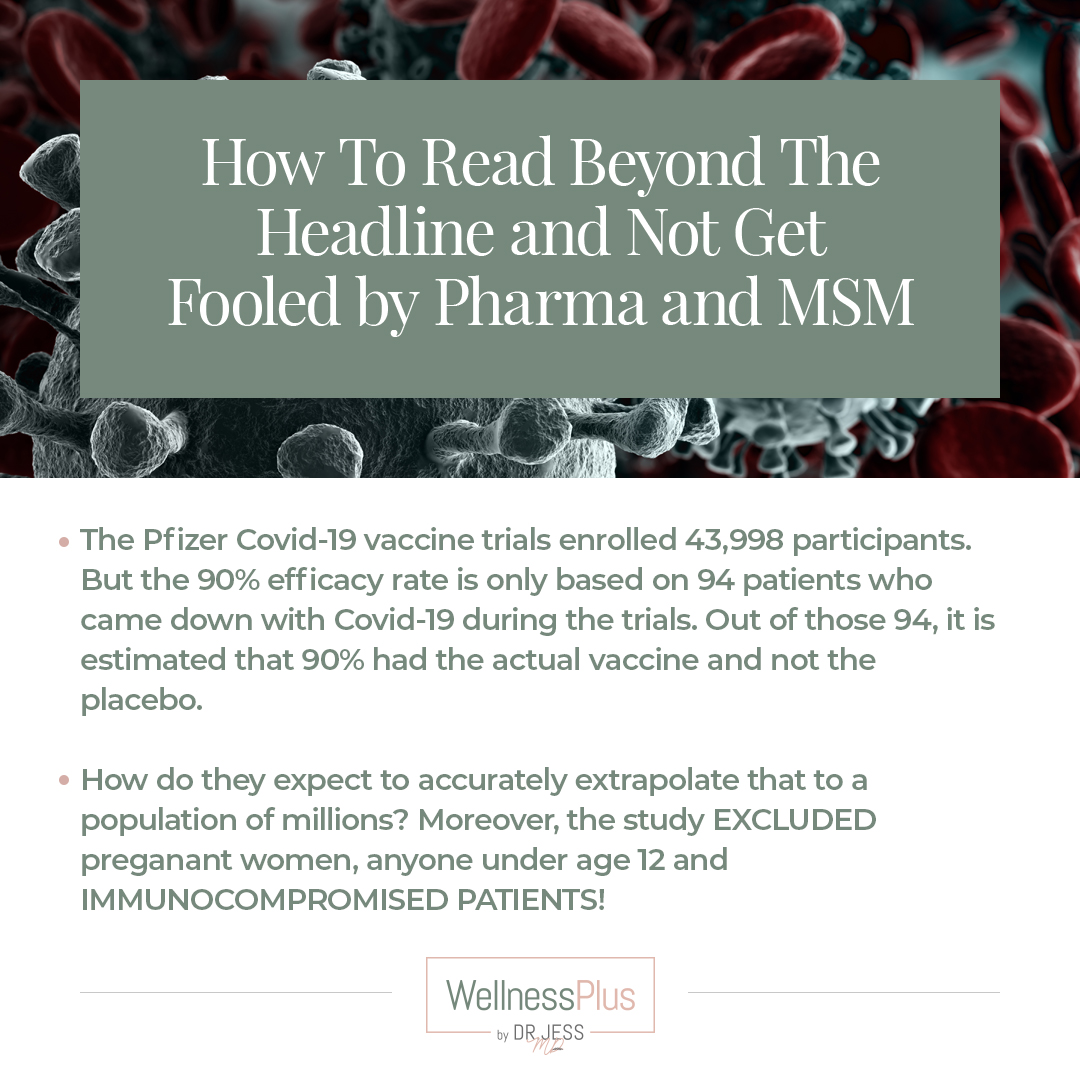 The preliminary data have yet to be peer-reviewed by other scientists and the specifics have not yet been released. But among people who received the vaccine, there were more than 90% fewer symptomatic cases of COVID-19 than among people given a placebo. It’s still unclear how the vaccine might perform among different age groups, including children and older people, and whether getting the vaccine affected the severity of the disease. None of the trials currently underway are designed to detect a reduction in any serious outcome such as hospital admissions, use of intensive care, or deaths. Nor are the vaccines being studied to determine whether they can interrupt transmission of the virus. So that’s full informed consent.

The trial has so far enrolled 43,998 people. Of those participants, 38,955 have completed the vaccine regimen, which consists of two injections approximately three weeks apart. At the time of the analysis — which looked at data seven days after participants received their second dose — a total of 94 people in the trial had confirmed coronavirus cases. The data did not include how many cases were recorded in each group or what portion of the nearly 39,000 people who got both vaccine doses were included in the analysis. The reported efficacy rate suggests that most of those who have gotten sick so far were in the placebo group. But it’s imperative to remember: That 90% efficacy is “only until day seven, after the last of the two injections.” 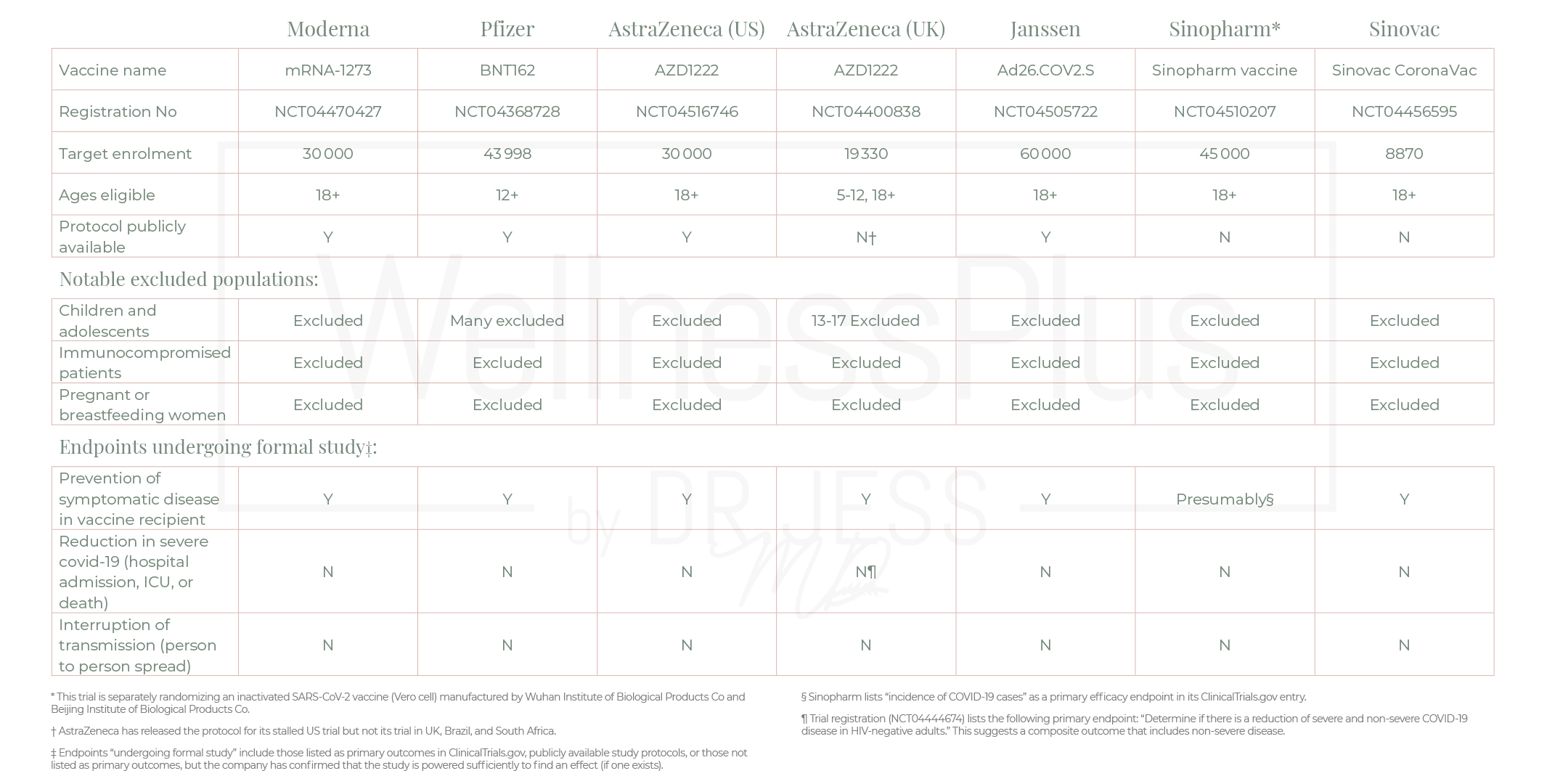 The important thing to note about these vaccine trials, although we are focusing on Pfizer’s vaccine here, is that they all exclude the population who needs the vaccine the most vulnerable, pregnant, and the immunocompromised.

Question: What is the definition of immunocompromised?

Answer: A person: unable to develop a normal immune response usually because of malnutrition or immunodeficiency or immunosuppressive therapy. This includes all people with autoimmunity, cancer, mitochondrial damage, and many chronic stealth infections.

Another pertinent question to ask is how many elderly participants were included in the trial?

In the graphs above, what are the primary endpoints? Please understand that NONE of these studies are determining whether the vaccine prevents transmission of the virus and how severe the infection is. They are not designed to test either of these very important endpoints. One reason I can guess is that most people with symptomatic covid-19 experience only mild symptoms, even trials involving 30,000 or more patients would turn up relatively few cases of severe disease. 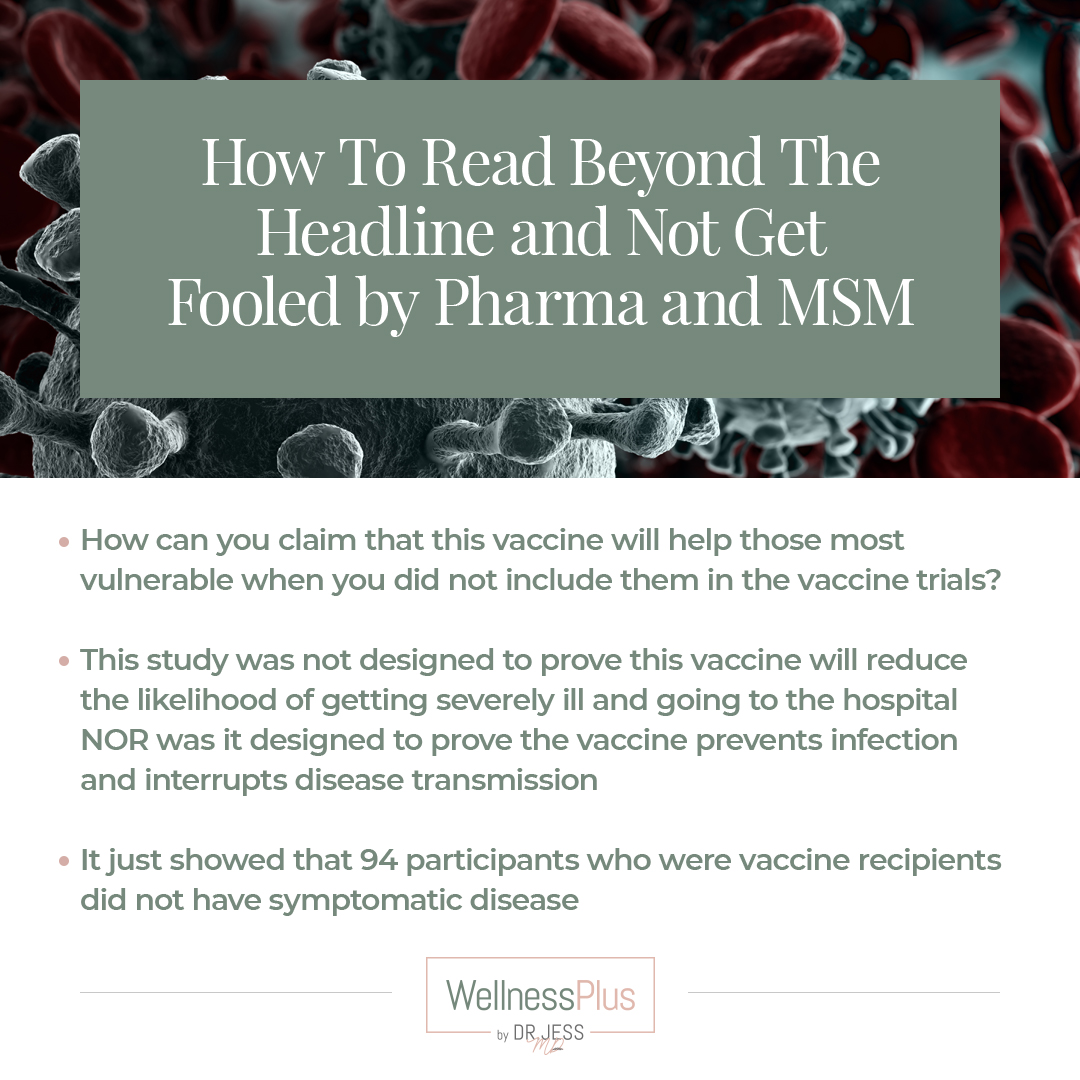 The concern here is that the Vaccine development is being rushed. It normally takes 10-18 years to develop and approve a vaccine for the public. It is important to note that history shows that vaccine developers do and have made mistakes along the way, and even more so If the process is an emergency or rushed. There were contaminated polio vaccines in 1955, cases of Guillain-Barre syndrome in recipients of the flu vaccine in 1976, and in 2009, an influenza vaccine was linked to a form of narcolepsy. Gardasil, the HPV vaccine, was rushed to market and has maimed girls around the world with infertility, postural orthostatic tachycardic syndrome, and syncope. Vaccines are one thing that is not a blanket medicine for everyone and definitely should be carefully brought to market. 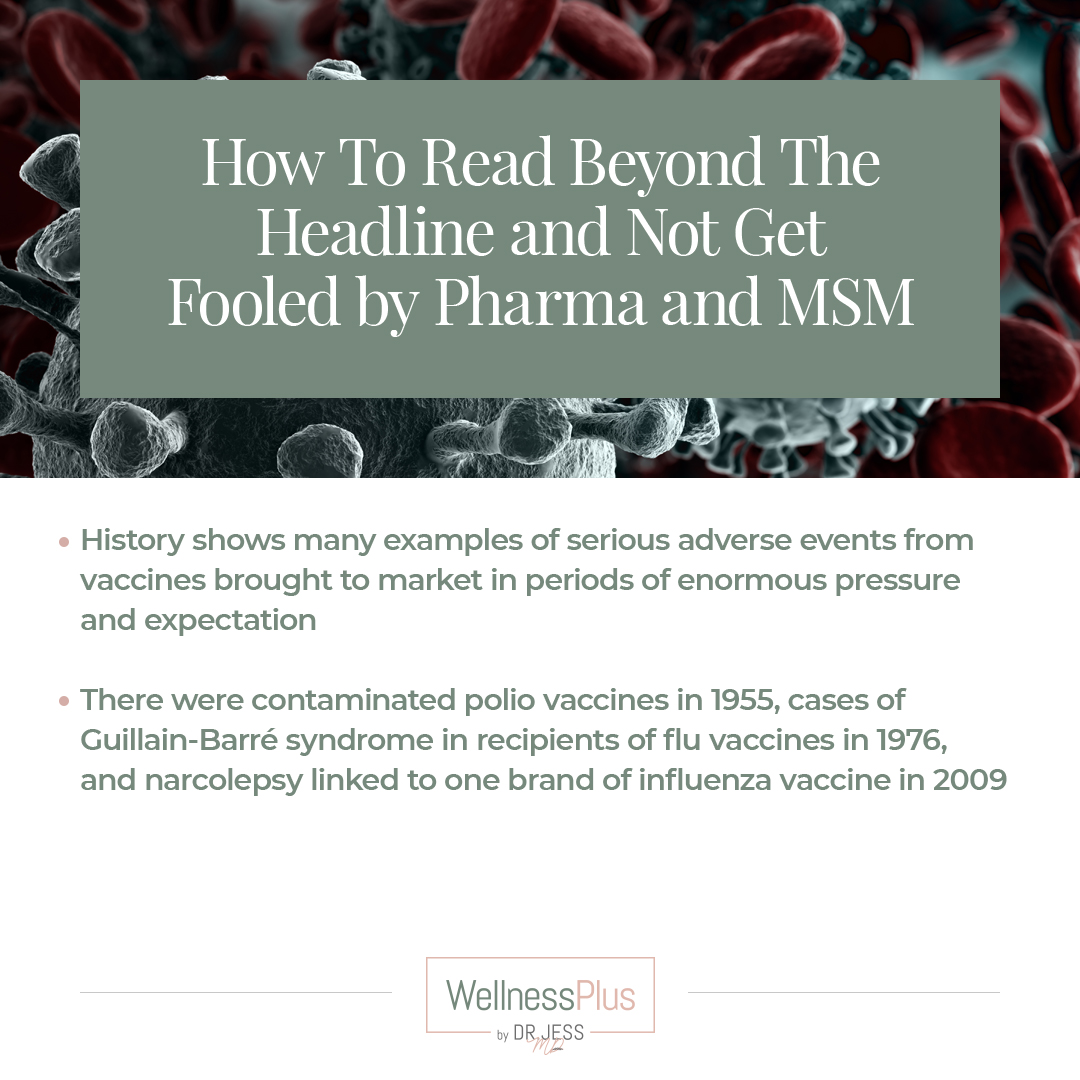 Pfizer has noted concern for compliance due to “flu-like” symptoms after the first injection. These symptoms may deter an individual from proceeding with the necessary second jab.

Missing holes in informed consent and recommendations due to study design

Here is who is recommended to get the Covid-19 vaccine:

This sounds good except the study design did not include anyone younger than 12 and we don’t have data on how many elderly were included. Sadly, pregnant and immunocompromised patients were not included in the studies, meaning anyone at high risk and any elderly, sick patients in senior care homes. Even people with autoimmune conditions would be excluded from these criteria. Isn’t this the population we should be including in a study design?  I caution this vaccine in the most needed population for some people given these reasons unless more research is done.

And if you don’t know, it is important to know that vaccine manufacturers are not held liable for any vaccine injuries (and yes, they do occur). The government gave them all indemnification and now taxpayers pay out families of injured children through the National Vaccine Injury Compensation Program. This should cause you to pause and second guess a vaccine being rushed to market when money is involved and people are indemnified. Especially when you know the history of rushed, urgent vaccinations.  If you believe strongly in vaccines, that is your prerogative. My goal here is not to spark an argument, but instead, give TRUE informed consent. That includes the good, bad, and the ugly about a medical procedure.

I hope you feel more empowered about how the Covid 19 vaccine is produced and how study trials and numbers are conducted. Knowledge is power and the more you know, the more you can protect yourself and your loved ones.